On November 8 and 9, 2021, the conference The Culture of Encounter: The Future of Intercultural and Interreligious Dialogue was held at the headquarters of La Civiltà Cattolica, co-organized by Georgetown University, Washington D.C.[1] It was the most recent in a series of collaborations between the two distinguished Jesuit Institutions, which began two years ago and continues to bear fruit. Among these is the “China forum for Civilizational Dialogue.”[2] Pope Francis sent the following letter for the occasion. Here follows, as documentation of the event, an article that appeared in “L’Osservatore Romano”, on November 9, 2021, by Roberto Cetera.

I have learned that Georgetown University and La Civiltà Cattolica have jointly organized a meeting to be held on November 8 and 9. I know that you have chosen as your theme the “Culture of Encounter” and that you will reflect, in particular, on the future of intercultural and interreligious dialogue.

I am very pleased with this initiative, which involves two ancient institutions of the Society of Jesus, with a history that goes back to 1789 for the University and 1850 for the Journal. Today, these institutions find themselves united in thinking about the future of our humanity. I am pleased, too, that you have involved the Congregation for the Evangelization of Peoples and the Pontifical Council for Interreligious Dialogue. Continue this fruitful collaboration with the various Dicasteries of the Holy See!

Thank you for your efforts to reflect on a crucial issue for our world. With your lectures, articles and joint initiatives, you continue to help so many to become masters and artisans of a culture that fosters mutual understanding.

Our world knows how to multiply connections, but today we struggle to listen to and understand each other. Dialogue is an authentic expression of the human, a path to be taken patiently, to transform competition into collaboration. We must put our energies into educating people to be respectful to others, recognizing their rights and fundamental freedoms. This is the way to build the future together.

Let this be your task: to ensure that differences live side by side, integrating, enriching and enlightening each other, even if this entails arguments and distrust. Fraternity, understood in its deepest sense, is in fact a way of making history, a task to which I invite you to commit yourselves resolutely.

Please pray for me; I will do so for you!

May God bless you and may Our Lady protect you.

Like a good wine, the encyclical Fratelli Tutti’s flavor becomes richer with time. One year after its publication there is a flourish of events reflecting on it and studying it in depth, aimed above all at highlighting new elements within the Church’s social doctrine. This is the backdrop to the two day conference promoted in Rome by La Civiltà Cattolica and Georgetown University entitled The Culture of Encounter: The Future of Intercultural and Interreligious Dialogue.

Among the speakers at Villa Malta were Cardinals Miguel Ángel Ayuso Guixot, president of the Pontifical Council for Interreligious Dialogue, and Luis Antonio G. Tagle, prefect of the Congregation for the Evangelization of Peoples. There were also representatives of the academic world and the Catholic and Islamic religious worlds, such as Sultan al Remeithi, secretary general of the Muslim Council of Elders, all under the guidance of Father Antonio Spadaro, director of La Civiltà Cattolica. In his introduction Father Spadaro informed the participants that Pope Francis had sent a letter to the organizers expressing his satisfaction with the initiative, recalling that “dialogue is an authentic experience of the human” and that “fraternity, understood in its deepest sense, is a way to build the future.”

Reversing somewhat the theme of the first panel of the conference, dedicated to the innovative character of the encyclical, Cardinal Ayuso Guixot said, “What do we mean by innovation? We too are the first to applaud its innovations when we speak of Fratelli Tutti without realizing that Pope Francis has done nothing more than reiterate and remind us of a truth as old as the world, which is at the root of our faith: that we are all brothers and sisters. Fratelli Tutti is not an exhortation to become so, but the declaration of an existential fact that Pope Francis unequivocally takes for granted, because we are all brothers and sisters, no one excluded!” He went on: “It makes me smile how amazed some people are when they read the encyclical. This tells us a lot about the situation we live in today. If the world discovers and is astonished only now that we are all brothers and sisters, we are in trouble!” Therefore,  in more than amazement, he looks at the stimulus: “The encyclical stimulates us to a renewed way of love, which is capable of compassion, tenderness, attention and forgiveness, generating fraternity, opening our hearts to  what the Gospel requires of us.” Building a culture of encounter means walking in the wake of the Second Vatican Council, the cardinal recalled. “At the end of the Council, on December 7, 1965, Pope St. Paul VI said, ‘The old story of the Samaritan has been the model of the spirituality of the Council, a feeling of boundless sympathy has permeated the whole of it’.” The figure of the Good Samaritan is also at the heart of Fratelli Tutti.

There are three aspects of the encyclical that Cardinal Ayuso Guixot developed in his speech: gratuitous love for all, urgent service to heal the wounds of humanity, and working together for peace. On the first aspect, the cardinal recalled the divine statement of Genesis 2, namely, “it is not good for man to be alone,” to indicate the deepest truth of the human being: “created to go out of the self, to meet the other.” The answer that Pope Francis believes can only be given to satisfy the transcendental aspect of relationships is the culture of love. Evoking Pope St Paul VI, Francis hopes for the rise of a “civilization of love.” On the second aspect, the cardinal calls for new forms of creative solidarity that counter the progressive dehumanization of a world bent on indifference and greed: “Fraternity is the most effective stance against the ‘culture of waste,’ while Covid-19 has only exacerbated situations of exploitation that have been going on for centuries.” On the last aspect, working for peace, Ayuso Guixot notes that although it is a commitment for the whole world, it certainly becomes an imperative for the believers of the different religions called, as Francis said, “to watch over as sentinels of fraternity in the night of conflicts,” configuring themselves as “artisans of peace.”

In the session of November 9, Sultan al Remeithi recalled how two principles predominate in Islamic consciousness, that of knowledge and that of just and pious cooperation, which constitute the bases for Muslim acceptance of Pope Francis’ exhortation to global fraternity. Cardinal Tagle in his speech also wanted to highlight the continuity and consequences of the encyclical with the main conciliar documents, in particular with Gaudium et Spes and Lumen Gentium. He spoke of this, in particular, to highlight the connection between Fratelli Tutti and the missionary vocation of the Church. “Fratelli Tutti is not an option in  the magisterial path, both of social doctrine and ecclesiology,” because to reach everyone is not possible for the human will alone, but needs the Spirit of God. “ It is missionary because,” continued the cardinal, “the search for fraternity is not the search for unity among ourselves, but looks toward the world. Communion and communication travel together.” There is a living relationship between fraternity and synodality, “because synodality is not looking within but looking at the whole of humanity. Since we define ourselves in the relationship with the other, when you look at others you look at yourself.” Creating a culture of encounter therefore means encountering reality: “There can be no authentic brotherhood,” he concluded, “without a true conversion to the sense of justice,  a social justice that is lacking in our day. And conversion, in the footsteps of St. Francis, like fraternity, must be integral: with God, with ourselves, with others and with nature.”

At the end of the meeting Father Spadaro underlined: “It is interesting how Fratelli Tutti, in meetings like this one, is metabolized and articulated in its multiple cultural, social and political aspects, which affect the whole world. It is a return to the origins, that is, to a Gospel that causes the world to ferment, regardless of the cultures of origin or religious beliefs. I think there is much to reflect on in the fact that the rethinking, today, of the bases of civil living, in peace and fraternity, comes from a spiritual leader and not a political one. It arouses, moreover, in so many different cultural environments, lively interest, participation and affection.”

All speeches are online at The Berkley Center for Religion, Peace and World Affairs 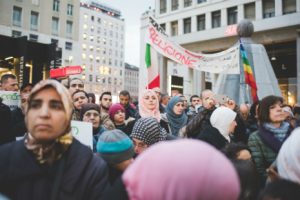