The Posting of Luther’s 95 Theses: History or Legend 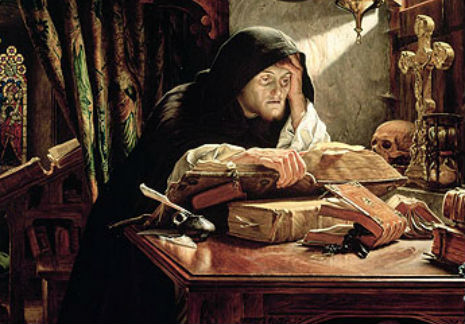 The Protestant Reformation began five hundred years ago, on October 31, 1517. According to historiographical accounts, on that day, the eve of the Feast of All Saints, Martin Luther, a young Augustinian professor of the convent at Wittenberg, is said to have nailed his 95 Theses on indulgences to the door of the castle church.[1] This event is only attested to in a single document, redacted by Melanchthon in 1546, several months after the death of the reformer: “Luther wrote the theses on indulgences and he affixed them publicly to the door of the church which is next to the castle of Wittenberg, the eve of the Feast of All Saints, in the year 1517.”[2]

The witness of a person like Melanchthon, someone so close to Luther and the origins of the Reformation, is not insignificant. Nevertheless, in 1517 Melanchthon was not in Wittenberg and, therefore, could not have been an eyewitness. At that time, he was 17 years old and was a young student at Tubingen; he arrived in Saxony in 1518 and, therefore, did not have direct knowledge of things which happened before then. Moreover, his writings contain some imprecisions regarding the preaching of indulgences. For example, he holds that the indulgences were preached in Electoral Saxony when, to the contrary, it is known that the prince elector, Frederick the Wise had prohibited them to stop money leaving Electoral Saxony, especially given that these funds would have supported his adversaries.

It seems reasonable, then, to question if the posting of the 95 Theses was a historical fact, or merely legend. This question is not of secondary importance, but rather is determinative in order to understand Luther’s spirit. It also serves to help understand how the monk of Wittenberg became “the reformer.” The theses are not a protest or a challenge to Church authority, but they reveal a problem of conscience posed by a teacher of theology, who seeks a clarification from his own bishop, first and foremost for himself, but also for the good of the Church. Posting them publicly would have called into question the sincerity of a person who honestly and responsibly posed an important pastoral problem and sought help in resolving it.

What value then does Melanchthon’s witness have? The historian Heinrich Boehmer wrote: “The celebrated preface (of Melanchthon) is just that, only a preface, that is, a writing composed quickly on paper, without any help, that does not have documentary value and is credible only in as much as his affirmations are confirmed by other contemporaries.”[3]

The value of Melanchthon’s affirmation was called into doubt by the historian Erwin Iserloh.[4] He notes that this is a later witness, some thirty years after the fact and not found in any previous account. And more importantly, this affirmation did not come from an eyewitness. The historian draws out the reasons for which the posting of the theses could not have happened, at least not in those terms. The point is that Luther, on that exact date, October 31, 1517, had presented his pastoral concerns regarding the scandal of indulgences to his religious superiors.[5]