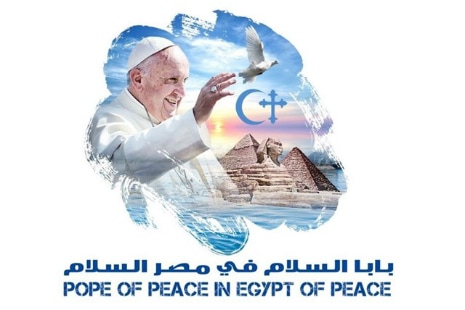 From the Tiber to the Nile

The papal plane touched down at Cairo International Airport shortly after 2 p.m. having flown over the Nile Delta and the sandy colored houses of the Egyptian capital. In the distance, the silhouettes of the pyramids reminded the papal entourage and the journalists on board that we were about to land in a country with ancient civilization, of which the people of Egypt are the heirs.

In fact, in his first speech at the University of Al-Azhar, the pope began by recalling how Egypt had a “glorious history” and evoked the “search for wisdom” that has always characterized its civilization: wisdom, talent, art, astronomy. But this land of water and sand, both fertile and arid, contains striking contrasts. Egypt’s porous stone is also soaked with the blood of martyrs. The wisdom of knowledge, which is open to the other, to diversity, seems threatened by a violence that denies otherness, and fails to recognize who this other represents.

During his journey from the Tiber to the Nile, being aware of these tensions, Francis wanted to visit “the cradle of civilization, the gift of the Nile, the land of sun and hospitality, the land where Patriarchs and Prophets lived, and where God, Benevolent and Merciful, the Almighty and One God, made his voice heard.”[1] The journey may have lasted just 27 hours, but its intensity seems to have dilated the hours and minutes.

“In response to the invitation from the President of the Republic, the Bishops of the Catholic Church, His Holiness Pope Tawadros II and the Grand Imam of the Mosque of Al-Azhar, Sheikh Ahmed Mohamed el-Tayeb, His Holiness Pope Francis will make an Apostolic trip to the Arab Republic of Egypt April 28-29, 2017, visiting the city of Cairo.” This was the announcement made by the Holy See Press Office on March 18. A pope invited by all the elements present in a society, at times in tension with each other.

Therapeutic Urgency and Unity of the Country

Then there were the events of April 9, Palm Sunday. In Tanta, halfway between Cairo and Alexandria, in the Nile Delta, a bomb exploded in the Orthodox Coptic church of St. George. The church was packed with the faithful and the State TV was broadcasting the celebration live. The images broke off at the moment of the explosion that left the dead and wounded among the church pews. Less than two hours later, a second bomb exploded in Alexandria in front of St. Mark’s Cathedral (venerated as the founder of the Coptic Church), where the liturgy was underway with Pope Tawadros II officiating. Forty-nine people died, and 78 were injured. The Egyptian security forces had also disarmed two explosive devices that had been placed in the Sidi Abdel Rahim mosque, in Tanta, where there is a Sufi sanctuary. On April 19, there was an attack on a checkpoint on the road leading to the ancient monastery of St. Catherine in Sinai.[2]

Pope Francis’ journey, therefore, suddenly assumed a higher value, a radically therapeutic one with the Church as a “field hospital” attending to wounded humanity through the hands of its universal shepherd. After all, this is one of Francis’ goals and characterizes his apostolic journeys: to touch the wounds. He did so in Bangui and Sarajevo, Lampedusa and Auschwitz, in the Philippines and Mexico and so on. After the bomb attacks, some had begun to question the wisdom of Francis’ journey. But on the contrary, in the eyes of the pontiff, the attacks made the apostolic trip even more necessary.

In addition, every attack on a Christian is an attack on the unity of the country, which is instead a precious fruit of peace.[3] “Pope of Peace in Egypt of Peace” as mentioned was the official motto of the visit. Francis was depicted smiling and blessing, with the pyramids and the River Nile in the background, surmounted by the Muslim Crescent and the Christian Cross, and next to a dove, symbol of peace.

The Encounter with the Imam of Al–Azhar

After landing in Cairo, the pope headed to the Presidential Palace in Heliopolis, where he was welcomed at a first private meeting and an exchange of gifts with President Abdel-Fattah el-Sissi.[4]

He then moved on to Al-Azhar, about 10 kilometers away, for a courtesy visit to the Grand Imam of the mosque.

The encounter with el-Tayeb[5] made this journey particularly significant. In fact, the mosque, with the associated higher school of Muslim studies in Cairo, founded in the 10th century, is still the largest center of theological and juridical studies of the Islamic world. Francis’ visit to Al-Azhar was of great symbolic value because his authority is recognized in the Sunni Islamic world, and each year, this school forms thousands of imams destined to preach in mosques around the world.

Francis had previously encountered Ahmed el-Tayeb in the Vatican on May 23, 2016, for a thirty-minute meeting. “Our encounter is the message,” said Francis according to those present.[6] It is important to have positive relations with the most credible and authoritative Sunni interlocutor precisely for anti-fundamentalist reasons, furthering the initiatives undertaken with certain Muslim elites in view of a wider and more incisive collaboration.[7]

The Bible: A Library Written by Migrants

Toward a Fully Chinese and Fully Catholic Church: The path indicated by Benedict XVI and Francis

What Becomes of Religion in a Post-Apocalyptic World?

North Korea and the Nuclear Crisis

‘Magnum Principium’ and the Inculturation of the Liturgy after the Council